“A couple of months ago I started thinking of artistically exploring other water sports besides surfing, not that I don’t enjoy painting graceful women hanging ten, but mostly because I wanted to go beyond that. It was then, that I got in touch with the Molokai 2 Oahu crew after sending them an image of a prone paddler that I had painted in 2017. It was a great surprise to be invited to produce the art for this year’s events, but it also challenged me to get out of my box and explore other angles, patterns and work digitally.  I am very stoked on how this turned out.”

This year’s art is the inspiration of Eduardo Bolioli who resides in O’ahu and is prolific in the Hawaiian Art scene. Born in Montevideo, Uruguay,  Eduardo Bolioli migrated to New York with his family in the late seventies, where he studied at the prestigious School of Visual Art later moving to Honolulu in the mid-eighties where he made a living painting surfboard for pro surfers, including world champions Shaun Tomson, Sunny Garcia and Martin Potter. He became the art director for Blue Hawaii Surf, and later, for Local Motion, and he designed for surf brands like Quiksilver, Billabong and Gotcha.

Eduardo hand creates all his art and is inspired by the ocean the creatures and people that play in it.  Fun fact:  in 1991 Absolut Vodka chose Bolioli to become the Absolut Hawai’i artist and commissioned him to create a painting for the ABSOLUT HAWAI’I ad that took part of their Statehood campaign. Bolioli’s ad campaign appeared in Newsweek, Time Magazine and USA Today.  He hasn’t looked back since and has enjoyed an extensive career in entertainment and the arts both in South America and Hawaii. Today Eduardo enjoys creating art and supporting the arts in Hawaii with his wife Victoria. 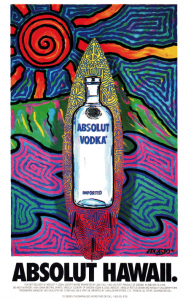